Corn rootworm remains the greatest insect pest threat to corn in Illinois, despite low populations in recent years compared with historical averages. Resistance to Bt traits and crop rotation throughout much of Illinois complicates the management decisions faced by corn growers.  Corn rootworms overwinter as eggs in the soil that generally hatch in late May to early June, well after corn has been planted in most years (2019 notwithstanding). Upon hatching, the larvae begin feeding on and ultimately pruning corn roots, causing reduced uptake of water and nutrients and increasing the potential for plant lodging (Figure 1). Due to the timing and nature of rootworm damage, any controls (whether a Bt corn hybrid, soil insecticide, or crop rotation) must be chosen prior to planting. Adult population monitoring from the previous season and field history are the primary sources of information available to estimate corn rootworm damage potential and determine whether a control is justified. 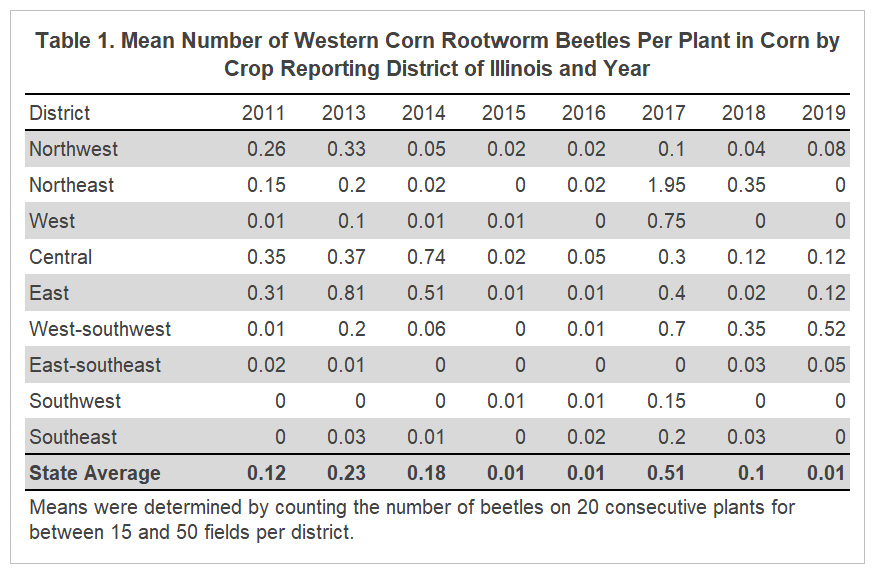 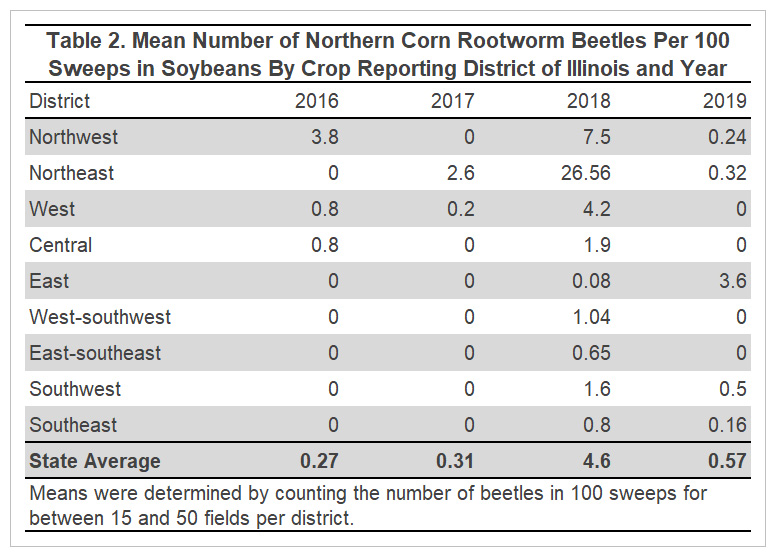 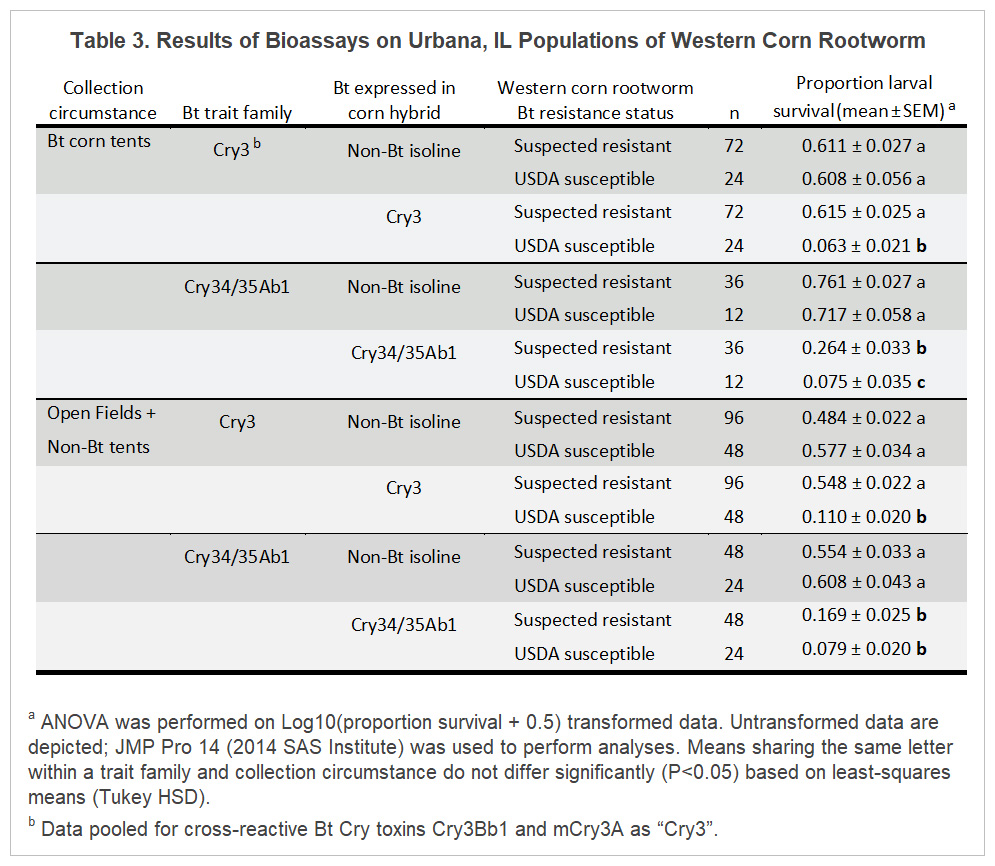 Despite ongoing resistance development to these individual Bt proteins, pyramided trait packages have generally performed well in Illinois over the last several years. Where unexpected damage has occurred in these pyramided hybrids, it has primarily been in northern Illinois and associated with continuous corn. In east-central Illinois, these pyramided trait packages and a variety of soil insecticides continue to provide effective control, especially under the low to moderate pressure situations that have been typical in recent years (Table 4). However, the use of rootworm control in Illinois generally exceeds what is needed based on rootworm pressure due to difficulties in monitoring this insect and the potential for yield losses if a needed control is not applied. This is especially true given recent low population densities, which provide an opportunity for producers to cut back on control costs when monitoring indicates a low risk of rootworm damage in their local area. 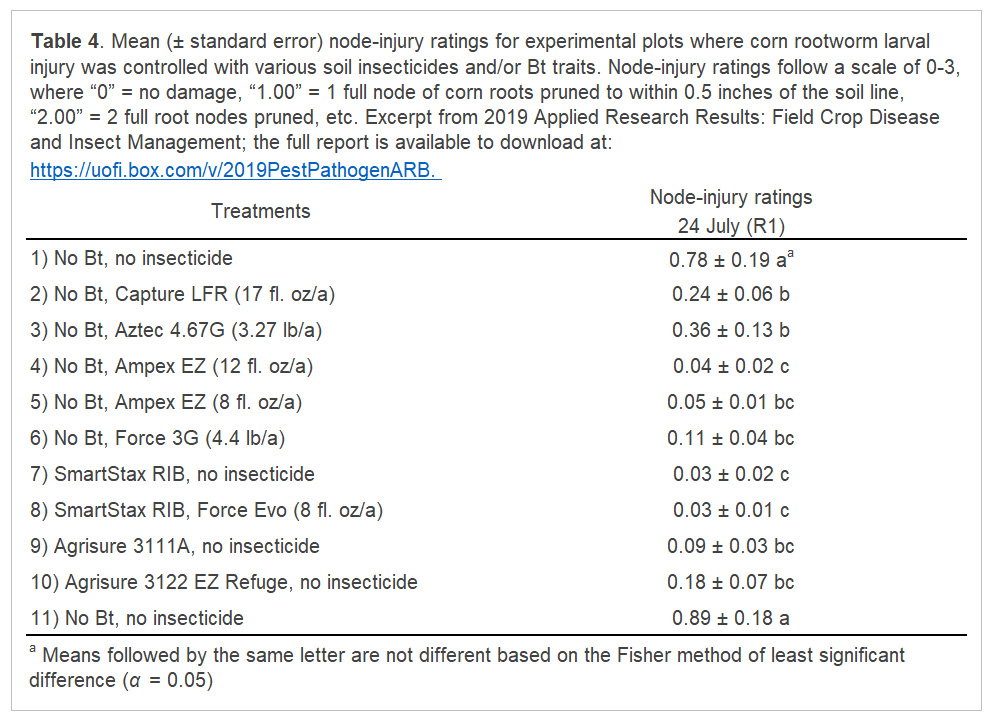 Ideally, rootworm control decisions should be based on the results of in-field monitoring of adults conducted the previous year when adult emergence is mostly complete (typically late July-mid August). When monitoring corn rootworms with a standard yellow sticky card trap, use an economic threshold of 1.5 beetles per trap per day (10 beetles per trap per week) in first-year corn, and a threshold of 2 beetles per trap per day (14 beetles per trap per week) in continuous corn (Dunbar and Gassmann 2013). Extended diapause allows some northern corn rootworm to overcome crop rotation as a management tactic – a proportion of their eggs deposited in a cornfield remain in the soil for 2, 3, or even 4 years before hatching, allowing them to hatch into rotated corn. Fields with high populations of northern corn rootworm adults are at risk of rootworm damage for 2-3 additional seasons, complicating management decisions when this species is present in rotated corn. (Note, however, that extended diapause also reduces the intensity of the damage by reducing the proportion of eggs that hatch in a given year). Where control decisions are made without access to monitoring data, consider including some untreated strips within the field to determine whether control was in fact justified. Where a control is necessary, use either a pyramided Bt hybrid targeting corn rootworm or a labeled rate of a soil insecticide.

Whatever control you choose to implement, you should monitor its effectiveness by examining some roots for pruning sometime after pollination but before black layer. When using a pyramided Bt hybrid for rootworm control, greater than ½ of a root node pruned to within 1½-inches is considered greater-than-expected damage, and should be reported. When resistance is suspected, the best mitigation strategy is to rotate the field(s) to soybean. Though crop rotation in Illinois does not necessarily protect first-year corn as it once did, planting soybean after corn does reduce the local population – any eggs that hatch in a soybean field will die. Populations with resistance to both crop rotation and a Bt trait have been observed in Illinois. However, it should come as no surprise that new instances of resistance to a Bt protein have always been observed first in areas with continuous corn production. Corn rootworm remains our most serious insect pest of corn in Illinois, but low western corn rootworm populations mean that the current risk in rotated corn is lower than it has been since rotation resistance was first observed in the early 1990s.

Dunbar, M. W., and A. J. Gassmann. 2013. Abundance and distribution of western and northern corn rootworm (Diabrotica spp.) and prevalence of rotation resistance in eastern Iowa. Journal of Economic Entomology 106: 168-180.